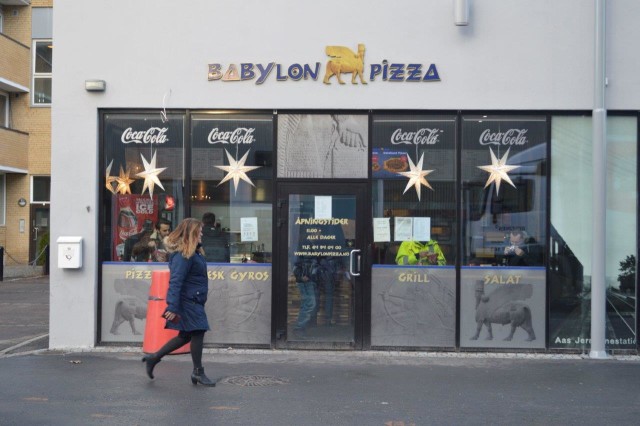 On a recent evening, I visited a local pizza shop in Ås, a little town just south of Oslo. I discovered that the two young men running Babylon Pizza were refugees from the war in Syria. As we talked, I learned that they were Christians, who spoke Aramaic.

Aramaic, as I knew, was the language that Jesus spoke. When he said, “Blessed are the peacemakers, for they shall be called the children of God,” Jesus was speaking Aramaic.

I asked them how to say “Hello” in Aramaic. Sargon wrote on a sheet of paper, “Shlama elohk”, with a deep guttural sound represented by the “hk”.

Sargon told me that Aramaic is still the language of the town of Maloula, high on a mountainside near Damascus.

When my pizza was ready, I glanced at the paper and told my new friends, “Basima raba.” They smiled and said in their ancient language, “You are welcome.”

So I got to thinking, as I ate the cheese-and-mushroom pizza in my little apartment (you can see the door to my apartment building at the left of the picture): What would Jesus do if he came back today, December 7, 2016, to our troubled world?

Would he walk along the streets of Oslo, brightly lit with Christmas decorations, admiring the festive displays in the store windows? Would he sit down at a table set with a red tablecloth and shimmering candles for the traditional Christmas feast? Would he seek to find the Christmas spirit in a church where the choir sang “Joy to the World” while the organ thundered in the background?

Or would he . . . go to Aleppo in northern Syria, where war had devastated the country since the spring of 2011. Military jets flew over the city, targeting apartment buildings where people tried to sleep at night. Targeting marketplaces where people tried to find food enough to get then through another day. Targeting schools where children tried to live a normal life. Targeting hospitals where doctors with limited medical equipment tried desperately to keep their patients alive.

Jesus might well find the hospital ward where exhausted young women were giving birth to undernourished babies, while the building shook from the bombs exploding in the streets outside.

He might say “Basima raba”, thank you, to the brave men who wore white helmets as they dug people still alive out of the rubble of a collapsed building, and then brought the injured to the hospital.

And when the bomb from a jet roaring over the city struck its target–the last functioning hospital in Aleppo–where men wearing white helmets had just arrived with another ambulance loaded with bloody people, and where doctors who had not slept for an eternity washed their hands in a bucket of dirty water before they turned to the next patient, and where the lights went off again, and where women wondered why they had been cursed by this insane war, and where newborn infants took their first breaths and shrieked with their first cries of life . . . and the bomb exploded in the heart of the hospital.

Jesus, who had already been through his torture on the cross, might pick up a dead child, a child gray with a blanket of dust, and wonder why, after two thousand years, we were still butchering each other.

He might walk out of the wreckage of that hospital with the gray dead child in his arms, so that he could walk along the brightly lit streets of Oslo and Paris and Berlin and Saint Petersburg and Moscow and Beijing and San Francisco and Fifth Avenue in New York. He might carry that child into the United Nations in New York, and lay it on the podium at the front of the General Assembly, for every nation in the world to see . . . before he told them, “Blessed are the peacemakers, for they shall be called the children of God.”