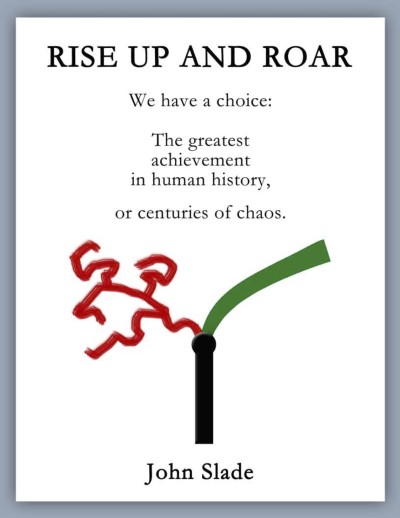 The peoples of the world are standing now at two major tipping points, one planetary, one human.

As the Arctic ice cap melts at an accelerating rate, the Arctic Ocean is increasingly exposed to the summer sunlight, which heats it.  The Arctic Ocean warms the Arctic winds, which warm the surrounding land and thus thaw the permafrost at an increasing rate.  The thawing permafrost is already releasing methane into the atmosphere.  Methane is far more effective as a greenhouse gas than carbon dioxide, and will thus wrap a much thicker blanket around planet Earth, greatly increasing the rate of global warming.  Methane is the monster.  Once the Arctic goes beyond the tipping point, we are doomed to struggle for centuries on a very different planet.

The second tipping point, which we ourselves control, can take us in a very different direction.  We have the clean energy technology to tackle the great challenges of global warming; we have already made an excellent start in the transition from coal and oil to the sun and the wind.  But we are still taking baby steps, when we need to be taking long bold strides toward harnessing the sun and the wind.

And we are very, very close to too late, now.

So a guy named John Slade comes knocking on your door with a book which speaks to the world with a vibrant and powerful story.  He has woven twenty years of international research on the twin themes of Global Warming and Clean Energy into a novel with young characters who confront the great challenges which they now inherit.  The story is global, and yet also very personal.  Rise Up and Roar is not gloom and doom, but just the opposite: the characters draw upon the best that is within them as they change the course of human history.

The narrator is Anna, a normal (bored) Norwegian teenager who becomes a deeply committed young woman in law school.  She meets the heroine of this story, a student three years ahead of her, a Sami women born in the Arctic, where her people have lived with their reindeer for thousands of years.  Aili Biriita has witnessed the changes on the Arctic tundra—warm winters with rain and ice instead of snow, early springs with soft snow and floods when the calves are born—and thus she is working toward a doctorate in human rights, so that she can protect her people.  Aili must protect the Arctic as well, and she thus becomes a powerful speaker who builds a global movement, primarily of young people.  Using unprecedented strategies, always peaceful, she educates a generation so that they are ready to design and build a far better world.

No preaching, no didactics, no jargon, no clichés, but rather a story with characters who are very real, showing us what we could do, if we would only do it.

All of this means nothing, of course, unless the story is compelling and the writing is crystal clear.  Read the sample chapters on this website: Anna and her mother help refugees from the war in Syria as they arrive in their little rubber boats at night on the beach of the Greek island of Lesvos. Read Aili Biriita’s dramatic, powerful, unprecedented lectures on a stage at the University of Oslo. Visit Paris. Visit Tahiti. You will discover that the reader becomes a participant in the story, not just a spectator.  Yes, the reader becomes a visionary . . . moving inexorably toward that very positive human tipping point.

From Oslo to a Greek island, from the tundra to Tahiti in the South Pacific, from Russia to Paris, Rise Up and Roar tells a tale which embraces the entire planet, and brings to life the Renaissance of the 21st century.

We have a choice: The greatest achievement in human history, or centuries of chaos.

The decision is yours.