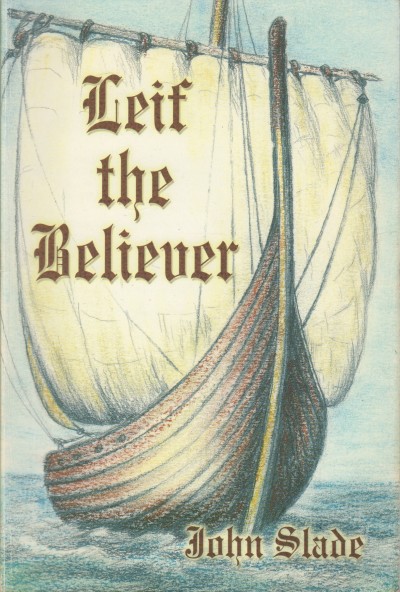 A viking who sailed to America with Leif Eriksson in the year 1000 A.D. returns to the world today. He finds much that is good, but he is stunned by the twin evils of global warming and modern warfare. In this unusual and powerful story, Leif the Believer changes the course of history.

The old Icelandic sagas and modern archeology piece together a picture of one notable Viking. Around the year 1,000 A.D., Leifur Eiriksson, born on Iceland, now living on Greenland, sailed with a crew of thirty-five men on a journey to the west, to see if he could find the land that had been sighted by another Icelander, who had been blown far off course.

Astrid knew two things immediately when her husband ushered his guest into the kitchen. One, the fellow needed a bath. And two, once he was cleaned up, he would be one of the most handsome men she had ever laid eyes on.

“I have but one month,” said Leif. “Then I and my crew must take to our oars.”

As Elisabeth walked slowly across the front of the classroom, putting her finger on a specific part of the blue-and-green something, Leif called from the back of the room—without raising his hand before he asked a question—“Elisabeth, I’m sorry, but . . . what is it?” He gestured toward whatever it was that she held so proudly.

She looked at him—with her mother’s dark eyes, and her grandmother’s cheeks—then she said, reaching the blue-and-green something toward him, “Leif, this is the world.”

The students were looking at him now, wondering who this guy was who didn’t know what a globe of the world was.

Elisabeth explained to the students, “Leif is a Viking. He comes from a time one thousand years ago. Back when people thought the Earth was flat.”

Leif stood up from his chair, reached into a pocket of his charcoal-grey trousers, took out three silver coins, looked at them on his palm—the printed markings were still clear—then he placed the three silver coins on the dark wooden table.

Bjørn stared at the coins, then he stared at Leif. “Where did you get them?”

“Ah,” said Leif, looking at Elisabeth, “the question is not, ‘Where did you get them?’ The question is, ‘How shall I spend them?’”

Bente met them at the door. Bjørn was reading a newspaper spread on the dining room table. “Look at this,” he said to his parents. “This is the culmination of a week-long earthquake in New York.”

Bjørn pointed at a political cartoon of the Statue of Liberty, copper green, cringing with her arm over her eyes as a row of banks behind her, tall and black, were collapsing. “September, 2008,” read the caption. “The beginning of the end?”

Astrid had heard on the radio news through the week that the American economy was having troubles, but she had paid little attention. It was the American war in Iraq that she hated, and if the Americans were making less money this week, she had no pity.

Leif asked, “What is New York?”

“New York,” said Bjørn, “is a market city like Kiev, or Athens, or Byzantium, but much larger. It is a city built on the mouth of a river in America, further south along the coast from where you wintered with Leif Eriksson. The banks in New York do business with banks and companies around the world. When the banks in New York go bankrupt, the whole global system is ruptured.”

“Wars?” asked Leif, baffled by so many things mixed together.

“Of course,” said Bjørn, “there’s no telling what the price of Norwegian oil will do. If the collapse becomes a recession, which becomes a depression, . . .”

“How about some dinner?” asked Bente. “Leif, have you ever had spaghetti?”

“Elisabeth,” said Leif, “in my time, a man was ready to fight. We carried weapons, and we were quick to use them.

“But that was a thousand years ago. Today, there is so much good in the world. You have schools for the children, doctors for anyone who is hurt, and food! You have more food in one store in your town than any Viking could possibly eat in a lifetime. So why are people still fighting?”

He looked at her, baffled.