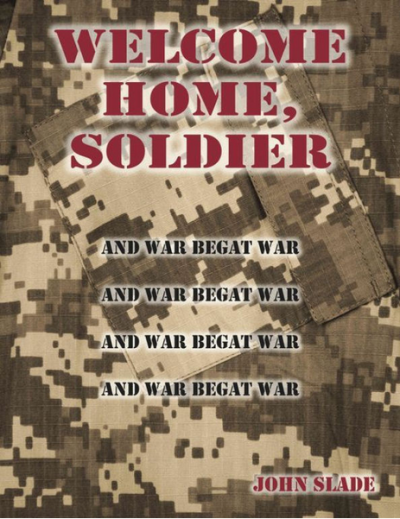 As we move from the 20th to the 21st century, we need to cast off the old shackles which have held us back for so long. One of them is war.

The struggles of the veteran returning home—and the struggles of his family and friends—has been a major theme running through many of my novels. Veterans have so much to say, so much to teach us, yet they rarely are given the opportunity to speak. The Great American Silence allows the next war to come crashing upon us, and the next, and the next.

I offer these eleven chapters, and one short drama, as a springboard for a Great American Conversation about the reality of war for the soldiers who fought it, and for the family and friends who share the struggle when the veterans come home.

High schools, colleges and universities around the world might well take one day a year, on Veterans Day, to meet with those who have been burned by the flames of war. Invite the veterans to speak in classrooms; give the veterans a microphone in the school auditorium. Let us ask our questions; let us listen to the answers.

Let us understand the causes of war—let us study closely those who profit from war—so that we can progress from the 20th century, the bloodiest epoch in human history, to the 21st century, when we take long bold strides toward an end of this antiquated madness.

Invite the veterans to speak. Invite them to help build the architecture of peace. Then . . . can they truly come home.

I dedicate this book to the soldiers and veterans around the world, who began the 21st century by fighting yet another war.

May they help to design and build a far better world.