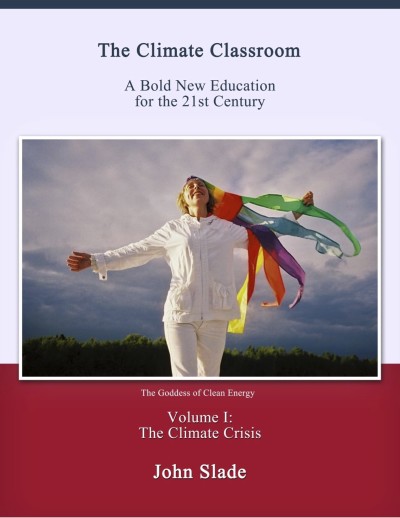 The two volumes are a guide for teachers and students
as they create two vibrant courses
for the autumn and spring semesters.

These courses, adapted to grade school, high school, and university,
will enable students and their communities around the world
to rise to the great challenges of the 21st century.

What if . . . we freed ourselves from the shackles of the 20th Century
—the poverty, the pollution, the plundering, the racism, and the wars—
and together, around the planet,
built the Renaissance of the 21st Century. 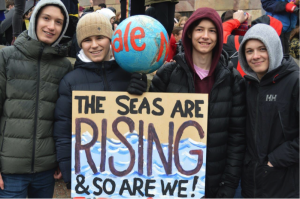 The Climate Classroom speaks with the voice of a teacher, a teacher who asks, “After students have been on strike for the climate on Friday, what do they read during the weekend? What do they discuss when they return to school on Monday?”

The Climate Classroom is a guide for teachers and students as they design their own climate courses, with special attention to their own region and their own climate problems. Students no longer follow the old one-two-three: read the textbook, listen to the lecture, take the exam. Instead, they are encouraged to do their own research. They invite members of their community—farmers, fishermen, medical experts, indigenous peoples, a meteorologist, a refugee—to visit their classrooms and join the discussion. Students reach out to other schools around the world where young people share the same climate problems—wildfires, droughts, heat waves, hurricanes and typhoons, sea level rise, the collapse of agriculture—so that a Global Generation can work together, starting as students . . . and becoming colleagues as they work on global problems, global solutions.

Although The Climate Classroom explains very clearly and honestly the enormous challenges which young people face, the book also encourages them, affirming again and again that they are able to rise up to those challenges. Thus the book is divided into two volumes. Volume I: the Climate Crisis explores during the autumn semester the complex problems which students how inherit. Then Volume II: the Clean Energy Renaissance explores during the spring semester the multitude of solutions which are rapidly developing in countries around the world. In a deeply positive way, The Climate Classroom enables students to understand that they, as the First Global Generation in Human History, can create the Renaissance of the 21st Century, their century.

With short chapters and crystal-clear writing, The Climate Classroom is not just for students, but for all of us. The chapters take the reader to the Sahel in Africa, where people are planting trees and capturing rain water; to the Vestas wind turbine company in Denmark, where pioneers have been working since the 1970s; to a coral reel threatened by ocean warming and ocean acidification; to the unprecedented wildfires of California and Siberia; to the melting ice sheets of Antarctica; to the upper atmosphere where the jet streams whirl around the planet; to the lagoons of Tahiti where the humpback whales give birth to their calves. Electronic links to research sources and videos enable the reader to hold a college course in her hands.

With a doctorate in literature from Stanford University in California, John Slade taught English above the Arctic Circle in Norway for ten years. As he worked with Sami students at their college in the heart of the tundra, he learned from the indigenous herders of reindeer about the early signs of climate change in the Arctic.

Slade lived with the fishermen in Henningsvær, a village in the Lofoten Islands, during the cod season; he learned from the people who have lived their lives at sea about the early signs of climate change where the Gulf Stream meets the ice.

He taught as well at universities in both Saint Petersburg and Arkhangelsk, where he learned to look at the world from the Russian point of view.

Slade combined his personal experiences with twenty years of climate research, so that the reader of The Climate Classroom becomes familiar with reports from the United Nations Intergovernmental Panel on Climate Change, with articles from a broad range of climate experts, and with videos from the recent Climate Conference in Madrid . . . as well as videos from the blue underwater world where the humpback whales nurture their calves.

And you will meet Emily, a bright teenager from . . . any and every country in the world. Her story is woven through the book, as she begins her own research, responds with new questions, and continues to grow in her thinking, in her vision.

The Climate Classroom. The looming catastrophes, and the beckoning hope.