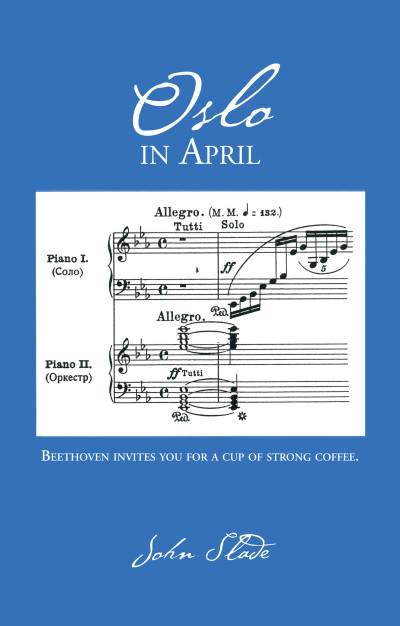 The author began this novel on March 21, 2003, during the first hours of the War in Iraq. Devastated by the commencement of yet another war, he sat down at the typewriter to compose “the most beautiful and positive story that I could write.”

Oslo in April, set in Norway, follows eight musicians from early morning on the first Saturday in April, to the symphony concert which they perform that evening in the Oslo Concert House.  They live very different lives, and confront a range of challenges through the day, but each musician is directed toward that special moment in the evening when, together, they will enter the musical world which they deeply love.

Johannes, the conductor, who wakes up alone because his wife has just left him.  Devastated, he knows he cannot possibly conduct the orchestra that evening.

Inger, the orchestra’s first violinist, who never married so that she could devote her life to music.

Voldemar, a young concert pianist from Tallinn, Estonia, ready to give his first performance in the West.

Astrid, a cellist from Lillehammer, who will celebrate her 70th birthday today by playing an opening solo.

Per Olav, a trumpeter, who is both a renowned master of fanfares, and a born farmer.

Eli Margrethe, a violinist and recent graduate from the College of Music, who is secretly composing her own symphony.

Lillian, a flutist, who learns about her mother’s devotion to her calling, and her tragic death.

Bjørn, a timpanist, and Lillian’s husband, who shares with her a search for a calling of their own.

Each of these musicians prepares for a three-part concert that evening: Tchaikovsky’s Sixth Symphony, a portrait of anguish; Rossini’s William Tell Overture, a portrait of resilience; and Beethoven’s Fifth Piano Concerto, a portrait of triumph.

Oslo in April moves as well through these three stages.  It is a story about people helping people, about people at their best.