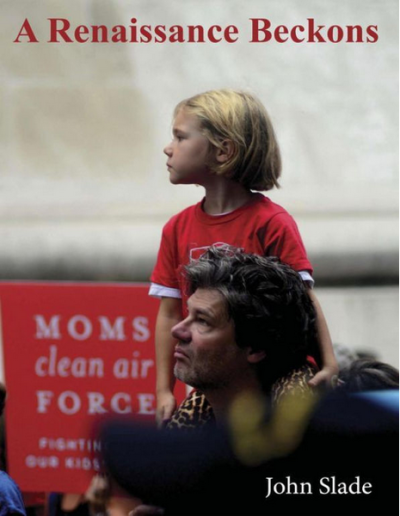 In this collection of five short pieces, the first begins with the voice of a teenage girl, “If I were a kid in the world today, I would roar. With outrage.”

The second piece begins with the voice of a Russian woman living in Norway, “I had every reason to be happy. I had a wonderful husband, two healthy, beautiful children, a challenging job, and a home with a yard near the University of Oslo.

“But I knew what was coming.”

The third piece begins, “In 1776, America was the most innovative nation in the world.”

The fourth piece, a story for middle-schoolers, begins with the voice of the Creator,

“All right,” I said aloud. My voice reached into the vast black emptiness between the stars, “I’ll give them one more chance.”

The fifth and final piece—a list of things to do—begins with the suggestion, “Push a child on a swing. What sort of world will this child live in . . . in 2050?”

Ring a bell, good and loud. Every day at noon, around 24 time zones, for almost two weeks.

Ring the bell for a minute. Ring it for five.

Every kid in every school around the world can have her and his own bell.

Ring that bell for ten minutes if the dullards in Paris are not doing their job.

Think how enormously good it would feel, to know that on every hour of the day—which is noon somewhere out there in the world—they are ringing their bells.

In support of all of us together.

For the first time in human history, we ring our bells for each other, and for Mother Earth.