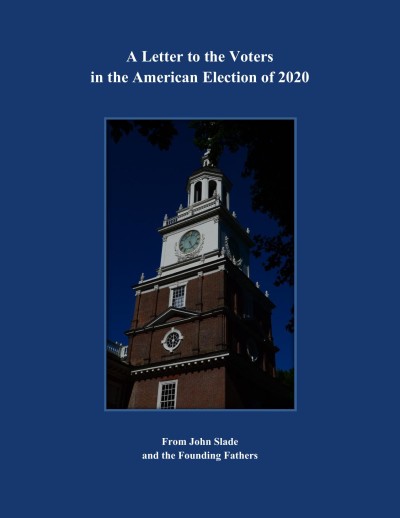 The Founding Fathers, and their wives, return to America today. Stunned by the shabby state of the nation which they had created with such care—they are especially appalled by the present government in power—they gather in Independence Hall in Philadelphia, where they once wrote the sacred documents of 1776 and 1787.

Can their experiment in democracy be salvaged?

What happens to a California girl—who embodied the spirit of the 1960s—half a century later?

A veteran in camouflage comes home from the war in Iraq. But despite his wife’s best efforts, and though he has returned to the family farm, he cannot find home.

What if President John Kennedy had lived, and had used eight full years to guide the nation toward peace?

Where would America—and the world—be today?

And . . . can we bring that bold, enterprising spirit back to America when we vote in November of 2020?

The stories and essays in this unique book ask the Big Questions. They encourage us to ponder deeply who we are, as we Americans either join the clean energy Renaissance, or crumble into chaos.

When the Founding Fathers wrote, “We the People”, they meant it.

The first chapter is provided as an excerpt.

The American Election of 2020

From the very beginning, we brought our sense of superiority with us. And from the very beginning, we brought our perceived right to use our muskets against anyone who stood in our way. We murdered our way from sea to shining sea. We slaughtered the buffalo as well, almost to extinction. We purchased our first slaves in 1619—Dutch traders sold their African cargo to the early settlers of Jamestown, Virginia—one year before the Pilgrims landed in 1620. Our unrelenting sense of superiority enabled us to see nothing wrong in our massive crimes against the peoples of two continents. Equally horrific, our sense of superiority enabled us to continue our brutality for the next four hundred years. From killing the “savages” in the forests of the New World, to killing the “gooks” in the jungles of Vietnam, and the “rag-heads” of Iraq—no longer with muskets but with the same self-righteous brutality—we have remained remarkably unchanged as we pursue “the American dream”.

And yet, in 1776, a group of well-educated Americans designed a new nation based on the principle that “All men are created equal”. An army of farmers and shopkeepers and carpenters and shoemakers, led by a wealthy general who genuinely believed in the equality of his soldiers, fought for eight and a half years against the most powerful army and navy in the world . . . and they prevailed. When General Washington met with the other Founding Fathers in 1787 to write the Constitution which would guide this new nation, he and his colleagues signed their names to the sacred document which began with the unprecedented words, “We the People”.
The African slaves, of course, were not included as the People. Nor were the remnants of the original people from whom we stole the land. Although white women were neither whipped nor shot, they could not vote, nor could they hold office, and thus their voices were severely muted.
A portion of the American population, primarily in the southern states, was so committed to an economy based on slavery that they were willing to fight a war to preserve that evil institution. In January of 1863, President Lincoln, seeking to correct the lingering flaw in the Constitution, signed the Emancipation Proclamation, granting freedom to the slaves. For his wisdom and his compassion, he was murdered. And the deep poison of racism remains with us today.

Thomas Jefferson once wrote, “Widespread poverty and concentrated wealth cannot long endure side by side in a democracy”. If we look at our America today, we see a nation guided by high ideals, but also a nation hobbled, crippled and shackled by ancient evils. Our multitude of sins—the poverty, the plundering, the pollution, the racism, and the wars—cannot go on forever. As we are marching steadily toward the tipping points of climate catastrophe, so we are marching steadily toward the tipping points of economic catastrophe, social catastrophe, and moral catastrophe. We will never survive in a world devastated by climate chaos if we continue to fight our wars, large and small, with each other.

We have a choice. We can choose to live according to the spirit of those sacred American documents, or we can continue to fire our muskets in schools across America and in countries around the world. We can invite the sun and the wind into classrooms around the planet, so that together we can build a clean and prosperous future, or we can continue to release increasing amounts of carbon dioxide and methane into our already poisoned atmosphere . . . until global drought causes the abrupt collapse of agriculture.

The American election in November of 2020 must determine whether we move beyond our crippling racism and greed and violence . . . or whether we continue our march toward self-inflicted suicide on a global scale.

The American election in November of 2020 must be a transcendent moment in history—equal to 1776, equal to 1787, equal to 1863—when we outgrow our arrogance, when we mature beyond our fears, when we lay down our muskets, when we honor both the bountiful land and the planet herself . . . and truly become citizens worthy of the gifts that we were given 244 years ago.

Yes, at this critical point in our long human journey, we have a choice. We can add another billion dollars to our military budget, or we can muster the courage to turn away from all the ancient grievances, as well as our crippling greed . . . and look instead toward a future in which we work together—all of the peoples and all of the cultures of our troubled world—to build a clean energy grid which brings the power of the sun and the power of the wind to every child on the planet—equally.
Benjamin Franklin was a newspaper publisher in Philadelphia, an ambassador representing the thirteen colonies in London, a statesman helping to draft the sacred documents in Philadelphia, and . . . a scientist fascinated by the nature and power of electricity. Were Franklin to return to our foundering nation today, and were he to learn that scientists are scorned, and that the ingenious machines which produce clean electricity are treated with contempt—while the coal and oil which poison the world receive massive federal subsidies—Franklin might well stand face to face with the Orange Powder-Puff and engage him in a public and vehement debate.

We might do well to go back to that winter of 1778 in Valley Forge, when Native Americans from the Oneida Tribe of central New York State arrived with wagons loaded with corn and squash and beans. The Oneida warriors joined the French Marquis de Lafayette, one of General Washington‟s most trusted officers, in raids on the British who were comfortably sequestered in Philadelphia.
Yes, we might well go back to the eight and a half years of that endless war, when troops marched from Boston to New York, and ultimately all the way south to Yorktown, Virginia . . . and when the women were marching with them, cooking, patching up ragged uniforms, and carrying buckets of water onto the battlefield so the soldiers could douse their cannons.

We might well go back to the final years of that long and brutal war, to the time when the French Army joined Washington‟s Army with their fresh soldiers and shiny artillery. And to the time when the French Navy—a fleet of warships which had sailed up from the Caribbean to Chesapeake Bay—blasted a fleet of British warships and sent them sailing back to New York, then blockaded the mouth of Chesapeake Bay so that the American troops and the French troops could fight and win the final battle against the British trapped in Yorktown, in October of 1781.

The American election of 2020—four hundred years after the landing of the pilgrims at Plymouth—must be a transcendent moment in history, because, otherwise, the tipping points—climate tipping points, economic tipping points, and moral tipping points—will alter the fundamental nature of our planet, and will condemn the frantic rabble struggling to survive . . . to centuries of chaos.

George and Martha, John and Abigail, Tom and Ben and James and Samuel, and the thousands of farmers and shopkeepers and carpenters and shoemakers who marched from Boston to Yorktown, are keeping a sharp eye on us.

Perhaps Ben said it best. He was asked by a newspaper reporter, in September of 1787, as the fifty-five delegates to the Constitutional Convention emerged from Independence Hall after four months of deliberations, “What have you wrought?”

Franklin replied, “A Republic, if you can keep it.”